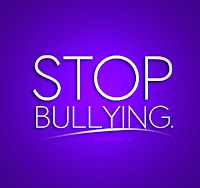 From a very simple stand point people are divided in two groups: Good people and bad people. Each of these two groups has its own purpose, the bad ones constantly want to hurt the good ones and all that the good ones want is to be left alone and try to make it and live their lives as best as they can. You don't have to be a genius to figure out from which group the bullies are.

At some point in our lives there are people who push us to the breaking points, if it's being done right we may be able to reach our full potential, if not we may lose our fight to live. Again, it's a no brainer figuring out what effect on us have the bullies. While the psychologists are making studies and spend their precious time studying this phenomenon and trying to come up with different complicated definitions of what bullying is more teens and kids are falling victims and very few are taking a stand against this plague, there is no other word more appropriate than "plague". It often makes me wonder about why we are the way we are, isn't there enough air, space, resources to peacefully coexist? Why some of us have the constant need to make someone else feel miserable and low? This I will never get and I'll refuse to do so, bullying has no excuse, bullying has to be punished, severely punished.

I get that some bullies had it tough and they use their failures and their suffering as an excuse to bring misery to others, and while it has been explained to them what are they doing and what kind of damage they bring they keep doing it, that's when it stops being forgivable. Some may think that bullying is a thing specific for schools and other educational institutions but that's not true, if you'll take a closer look around you you'll notice that bullying is taking place everywhere and at all times. And while some people can stand for themselves there are plenty who can't, and it's not their fault that they can't, not all were built G.I.Joes. Or they simply weren't educated to be that way, but after all, as a human being not everyone has to be built to be able to stand up for himself, I wanna believe that the men were created to peacefully coexist, I wanna believe that everyone has the right to feel secure at all times without fearing of getting hurt by another peer.

While various states around the world are fighting against terrorism, poverty, economical failures or social uprisings I think we should all fight against bullying and none of that would ever happen, the solution is very simple to find and diabolically hard to put into action. Why is that the simplest solution of them all? Because bullying is simply the mistreatment we get everyday from other peers, mistreatment that is not monitored, punished or prevented. There were so many crimes that could have been prevented if that or that or even that kid was not to be bullied when he was a kid and all his kindness and positivity has not been sucked out of him. If we all were to be kind to one another and set some ground rules for all to be respected we all could finally understand that heaven is not somewhere on another dimension but it's right here on earth, and despite natural disasters we can all stick with each other and get through everything.

A thing that we all should finally get is that a man in pain can do a lot of destruction, so let's be kind to one another and you'll instantly feel how time is adding on people's hourglasses, they're time on earth is getting longer and longer, some of them will even get to see their grandchildren and will have no regrets of how they lived their lives 'cause they did it right, they did a lot of good deeds that went unpunished and the good memories of them and their deeds will live beyond time.

A life without bullying is a beautiful life, let's make it happen. I won't live that long to see the day when there won't be any anguished souls, no pain caused by mean people, no tears, no screaming, no crying out for help in the middle of nowhere, no solitude, no desperation, no going crazy and no wishing to die. You don't want to be bullied and if you never were bullied don't let that happen to others, but if it's happening give them a hand and take a stand against bullying, defend them and be their hero, everybody needs a hero in their lives, be theirs, protect them and take special care, and someday they'll get to be somebody else's hero.

I found this page on facebook and it seems appropriate to invite you to give a like to it and stay informed on what we all need to do so we all could stand a chance at a full life without any bullying in it.


Ending this I'm gonna say what I usually say for quite some time now.

Be good to one another and maybe you'll get to change a life.