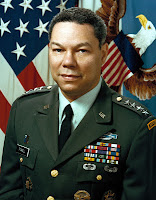 I have a book called "Leadership: Enhancing the lesson of experience" which I browse through every now and then and today I stumbled upon Colin Powell's rules. Before proceeding with reading some cleverly written rules you gotta know who Colin Powell is.

Colin Luther Powell (born April 5, 1937) is an American statesman and a retired four-star general in the United States Army He was the 65th United States Secretary of State, serving under President George W. Bush from 2001 to 2005. He was the first African American to serve in that position. During his military career, Powell also served as National Security Adviser (1987–1989), as Commander of the U.S. Army Forces Command (1989) and as Chairman of the Joint Chiefs of Staff (1989–1993), holding the latter position during the Gulf War. He was the first, and so far the only, African American to serve on the Joint Chiefs of Staff.

6.    Don't let adverse facts stand in the way of a good decision.

13.    Perpetual optimism is a force multiplier.

My personal favorite is number five, you may know another version of it "Careful what you wish for" and I think of it almost all the time 'cause to some extent it's been true for me, meaning I wished for a lot of wrong things.

Which one is your favorite?

Be kind to one another and maybe you'll get to change a life.
Labels: Colin Powell's Rules, Leadership, Worth Sharing