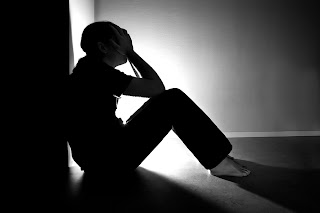 Yesterday I wrote a few lines describing my mood and I said "I've got some moving to do, again ..." well today that couldn't be more appropriate, if I were a psychic I'd say I knew something bad would happen that would make me think like this. But I'm not sure that I can move on, I need some closure, I need to mourn, and since there is no one around who would understand, I am once again alone in this and I gotta make the good out of the worst, but soon I might find out that this is not the worst, that is just the beginning.

Before proceeding with some details about what exactly happened that has thrown me into a deep massive depression I would like to apologize to all of you who are reading this post right now. Several weeks ago I renamed my blog from "Who Am I? Still Finding Out ..." to "Inspired by Gabriel" since I stopped looking for who I am a change was more than appropriate. Although "Who Am I? ..." was a big part of my blogging history I didn't want to make a big fuss about it and write a whole article about that. A lot of changes have occurred since I've launched this blog. And many more are scheduled to appear, sometime in the near or far future, we'll just have to wait. But back to apologizing. Some of my stories are written to inspire to become better friends, better people, better parents. Some stories are to inspire to do good things more often to more people. Other stories are about people whose examples are worth following. Also there stories that make you smile but if I take a minute to think there aren't many of that kind, the one that would make you smile, most of my stories are sad as my life is. And with that I feel guilty and feel like I'm disappointing, I wanna inspire you in a specific way but I'm failing to do that.

In one of my previous posts I've summarized the things I've tried to succeed in. I've tried applying to uni several times, failed. Applied to the Youth in Action programme, Action 2 European Voluntary Service, failed. Tried finding a job, found one, didn't stick, failed. Tried to find an Au Pair/baby-sitting job, failed.I've tried some other things but I haven't slept all night last night so I can't think normally. It's just the afternoon in the eastern europe but I think I'm going to sleep as much as I can 'cause staying awake is not worth it.

I made a big mistake by applying to Youth in Action, European Voluntary Service section, again, I wrote another motivation letter for a specific project in United Kingdom, I wrote it from scratch specifically for them, I tried to respect all the requirements, I've sent the application and it's been eight days since I've done that and today I got the answer I already knew I was going to get. Have a wild guess, it starts with "Unfortunately, ..." and if you think that is bad imagine me doing this for dozens of times for two and a half years with some break every once in a while. Most of the time I was alone in it, as I am in most things, but this is one thing every candidate needs supervision with and since my youth organization lacks team members I was either doing it alone or not doing it at all. And even if that doesn't draw you a picture imagine my mother coming home soon, my number one enemy is coming home and imagine a dog sick with rabies never shutting the fuck up well that is my mother. She won't back down no matter how loud you scream or how many tears you shed, you're an ant for her and she won't mind squashing you down. She won't miss the chance of reminding me of all my failures and how not listening to her "orders" and "indication" got me buried deep in shit and I deserve everything I've got or to be more exact I deserve having nothing, and if that doesn't do it she'll tell me a few dozens more that I'm worthless and I don't deserve a dime from her or anyone else for that matter.

Back to my EVS application, I'm tired so I'll post it and go to sleep but before going I have a question for you. That project was about helping residents of a center specialized in taking care of people with disabilities in getting on track with their life and making that transition as smooth as possible. Please read this motivation letter and imagine being a member of the selection committee. Would you choose me? What have I done wrong?

I have a lot of thoughts on this matter but my brain simply refuses to cooperate. I'm doing all kinds of errors and making typos the whole time I'm writing something and since english is not my first language it happens a lot more than I'm expecting it to happen. And that bugs me.

I'll come back in twelve hours, maybe less, and I'll read your reviews, if there will be any.